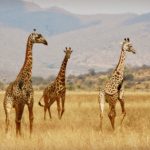 The 3,270 km2 Mkomazi Game Reserve in northern Tanzania was heavily degraded by poaching, burning and illegal hunting. Its future was not secure.

In 1989 the Wildlife Division of the Government of Tanzania invited the George Adamson Wildlife Preservation Trusts (GAWPT) to work together with them on a programme of rehabilitation.

Together, in a partnership that lasted for 30 years, they did not just rehabilitate it, they established a fully functioning and flourishing national park. They built boundaries, airstrips, roads, dams, a comprehensive radio network and a fully functional training college. They recruited and trained ranger and tracker dog teams.

Perhaps most importantly they established extremely successful Black Rhino and African Wild Dog breeding programmes which facilitated the reintroduction of over 200 wild dogs and more than 30 black Rhino. Elephant populations increased from 11 individuals to over 600. Moreover, an environmental education programme was founded which continues to help students from surrounding schools to see the value of conservation. Mkomazi Game Reserve was upgraded to National Park status in 2008, protected in perpetuity for the nation, and Tanzanian National Parks took over the close administration and management of the Park.

Thank you so much to those who donated to this project! We are proud to have supported it and to support GAWPT as they focus their efforts back on Kora National Park in Kenya.