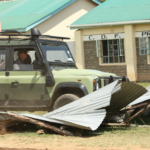 Likii special needs school had over 100 students on the waiting list, but it could not accommodate them. It is one of only 184 dedicated special schools in Kenya where children with severe and multiple disabilities can receive special education and care.

The school is in the growing town of Nanyuki which borders Mount Kenya. When we first visited, the school was on a 5-acre plot of land, but it had only been able to afford to erect a fence around one and a half acres and so the school’s capacity was limited. The school did not have an official title deed for the land it was on, and it was at risk of losing the area outside the fence to other developments.

During the Safari, some very willing guests helped with the construction of the last part of the external fence. Then the guests watched as we drove through the internal fence to knock it down (pictured above).

The children were inside the school when we knocked down the internal fence. It is difficult to describe the expressions of excitement on their faces after the fence was knocked down and they saw all the new space they had to play.

We have kept in touch with the school, and since this project, the school has received donations from a variety of other organisations. These have allowed them to build several new classrooms, bathrooms and other school buildings. The capacity of the school has increased to 200 students and there is still plenty of space to play.

A massive thank you goes to the guests; the Kisima Foundation; Joseph Kilai who works with the school and everyone else involved in making this project happen!