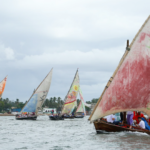 As part of a large group safari in 2016, we helped to fund and take part in the Lamu Seafront Rehabilitation Project, led by the National Museums of Kenya. The project involved the restoration of the Lamu entrance arch; repainting the outside of the Lamu Fort and waterfront buildings; cleaning up litter and rubble and tree planting.

We did not stop there.

A theme of this safari was ‘mitumba mara tatu.’ It’s a Swahili saying that means to use something again and again. We tried to make every dollar used on the safari do as much good as possible as it dropped down the value chain.

For example, some of the sails of the community-owned dhows needed replacing, so we sponsored a dhow race, and guests painted the sails of the boat they would be racing in. Then we donated 30 new sails to the boat owners and the old painted sails were sewn into bags by ladies in the community and given back to the guests at the end of the trip.

Another example of ‘mitumba mara tatu’ in Lamu was the guests dressing up in Buibuis and Kanzus for the dinner on the last night that was hosted by the community in the fort. Afterwards, we donated the over 100 Buibui’s and Kanzus they wore to needy families in Lamu. Additionally, donations were made to Safari Doctors and the Anidan orphanage whose drum group gave a fantastic performance for guests upon their arrival in Lamu town.

Thank you to everyone who helped us to spread the benefits of this safari as widely as possible in the community that hosted us in this remarkable destination.