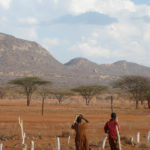 We first came across this school in Isiolo County, northern Kenya, in the ’80s. Back then, lessons were conducted under a thorn tree, and writing was done in the sand. Some women from the community then constructed a hut and we started by donating a blackboard, chalk and pots and pans for food. Then the community decided they wanted to build a proper school.

So after each safari to this area, money was put aside for the school. This money was generously added to by donations from guests who wanted to help. The county council of Isiolo allocated the land. Then with the help of our fantastic crew, the first four classrooms at Kipsing were built, and Kipsing Academy was born.

Over the years we helped to built toilets, more classrooms, teacher housing and fencing. We provided the school with desks, bursaries, books, food supplies, water collection tanks, gutters and chalk. Chalk! There were more than a few occasions when we had forgotten to get chalk on the drive up north to set up camp, and we had to turn back to the nearest town to get some so that the school had enough to continue lessons. Kipsing Academy is now a fully-fledged government primary school with students from class one to class eight and boarding facilities.

This humble school was the starting point for a Professor of Medicine at the National Intelligence Service; Attorneys; Speakers of the Samburu and Isiolo County Assemblies and our Sammy Leseita. He was a student in one of the first four classrooms in this school, and he has graduated from Harvard with a Masters in International Education Policy and is now the Director of Education at Northern Rangelands Trust. This school showcases the transformative potential of education.

Thank you to those that donated and to anyone who visited, for your part in making the transformative potential of education a reality for this community.