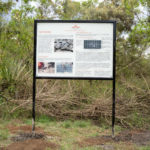 Hyrax Hill Prehistoric Site and Museum is one of the most visited archaeological sites in Kenya by school groups. However, it was in sore need of signage next to the archaeological sites around the hill so that visitors could better understand the importance of what they were looking at.

Hyrax Hill is north of Lake Nakuru in the Rift Valley just a few hours drive north-west of Nairobi. It was proclaimed a national monument in 1945, and the National Museums of Kenya currently manage it.

This hill is particularly special because it contains evidence of several phases of human occupation and it has a long history of archaeological investigation, which is why it is one of the destinations featured on our Safaris Through Time.

Proceeds from the Safari Through Time were used to pay for the printing and installation of information panels at the sites around the hill, as well as new perspex display cases for inside the museum. Also, to make the experience more interactive, new wooden bao boards have been secured near the real bao game that is carved into the rock on the hill. Now students can learn about how to play bao and its history in Eastern Africa without damaging the actual archaeological example. Lastly, information panels about the wildlife in the Rift Valley are being installed around the trail on the hill.

Thank you to those who visited, and everyone involved.