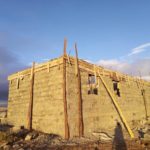 Empakasi Green Valley Community School is near the Emakoko lodge located in Nairobi National Park. The school was recently formed because the nearest government school was more than 10km away, which was too far for the youngest members of this community to walk. It was also a dangerous walk because of the wildlife from the park. The Nairobi National Park is home to 100 mammal species, including rhino, buffalo, giraffe, lion, leopard, baboon, zebra, wildebeest and cheetah and 400 migratory and endemic bird species.

Thanks to some wonderful guests, the school’s first two permanent classrooms were built and furnished, which cemented the school’s place in this community and reduced the potential for human-wildlife conflict in this area. Those same guests have also just helped the school build a block of sustainable new biogas toilets. These are making such a difference in their everyday lives, as before, they were sharing one bathroom between 48 students and five teachers!

Currently, the school has around 50 students in pre-primary and grades 1, 2 and 3 according to community member Benson Parmisa, who donated his land for the school:

"each educated child is a light in the community"

community member Benson Parmisa, who donated his land for the school

So this may be a little school, but it saves lives, reduces human-wildlife conflict and brings hope to this community! Thank you so much to everyone involved!