Some Days are Diamonds

Transporting 10 white rhino into the Okavango

It started as one of those days where the anticipation woke me before my alarm went off at 4 am. As I made coffee in the pre-dawn chill dogs barked from across the Thamalakane river in front of my house.
I gathered a few items, a sat phone, a flask of tea and some snacks for the day ahead and was at The Pony Transport truck depot by 5 am sharp. 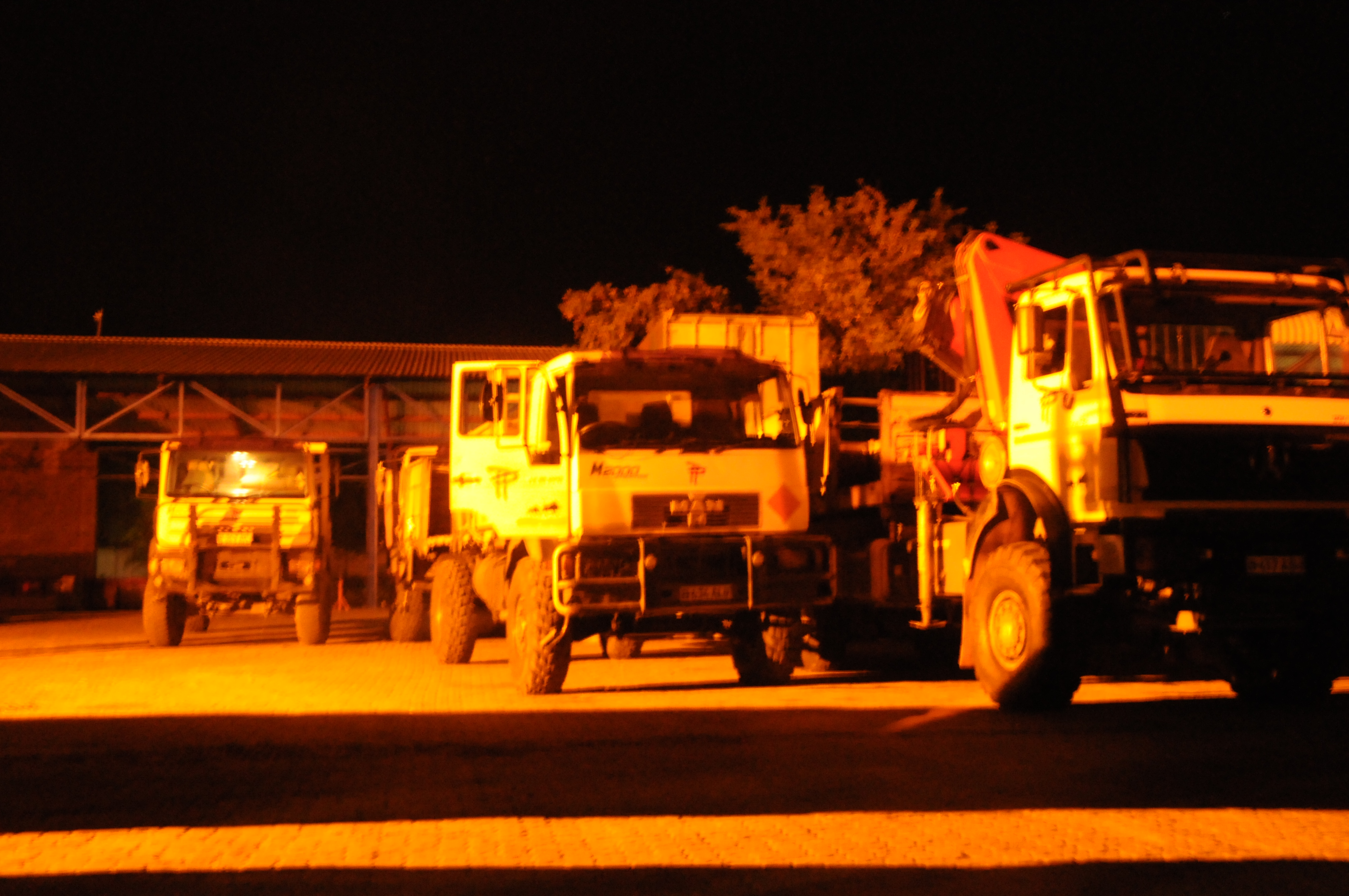 Nine trucks were already running and warming up in the dark. A sulfur yellow flood light caught the reflective strips on the coveralls of the assembled truck drivers. The atmosphere was quietly competent. By 5:15 we drove out of the yard in a convoy that was as professional as the best military operation. The first unscheduled delay occurred when the clearance form with all our names and truck registrations was missing at the apron entry gate to Maun airport, but it was only temporary, and we followed the leader to park next to the helicopter hangar in front of which the plane carrying the 10 rhino from Durban was due to land at 6 am. Only it too had encountered a delay. The loading process had taken longer than anticipated and this Russian cargo plane had missed it’s takeoff slot and had to wait another 45 minutes for air traffic control to fit them in again.

Dawn broke, and with compliments from Great Plains, a hearty breakfast was served to all. Dereck Joubert informed me that the plane had just taken off from Durban and was on its way. As the light strengthened and the purple gave way to orange, so too did the expectancy.

At 8:30 all conversation ceased and without exception, eyes turned towards the behemoth turning onto the final approach of Maun’s runway 08.

The Ilyushin Il 76 touched down, and the ground shook as the four pre-noise abatement age jet engines each producing 32,000 lbs of thrust went into reverse. For a plane junky like me, it was already turning into a good day. As it taxied in, the pilot had to increase power dramatically to negotiate the small rise to the parking spot. The takeoff weight of this puppy is a whopping 195,000 kilograms. 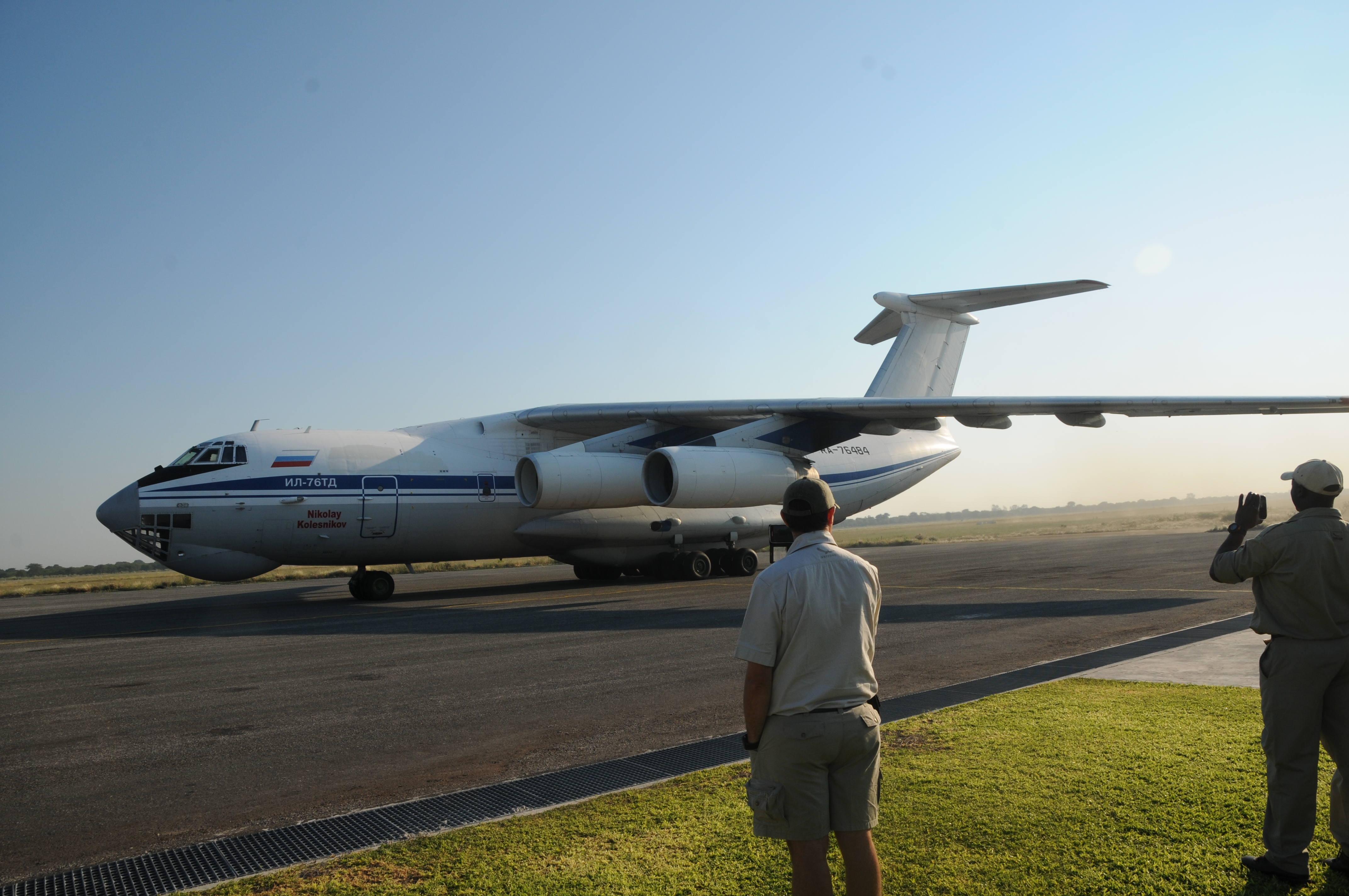 The quiet that followed the engine shut down was short lived. Trucks started and the plane’s APU was fired up to provide the power needed to offload 10 purpose built crates with one rhino in each. The rear cargo bay doors swung open and a MAN truck reversed into the opening. I own two trucks just like that and I can tell you they look pretty big until you park them under an airplane with a tail that sticks up 50 feet into the sky! 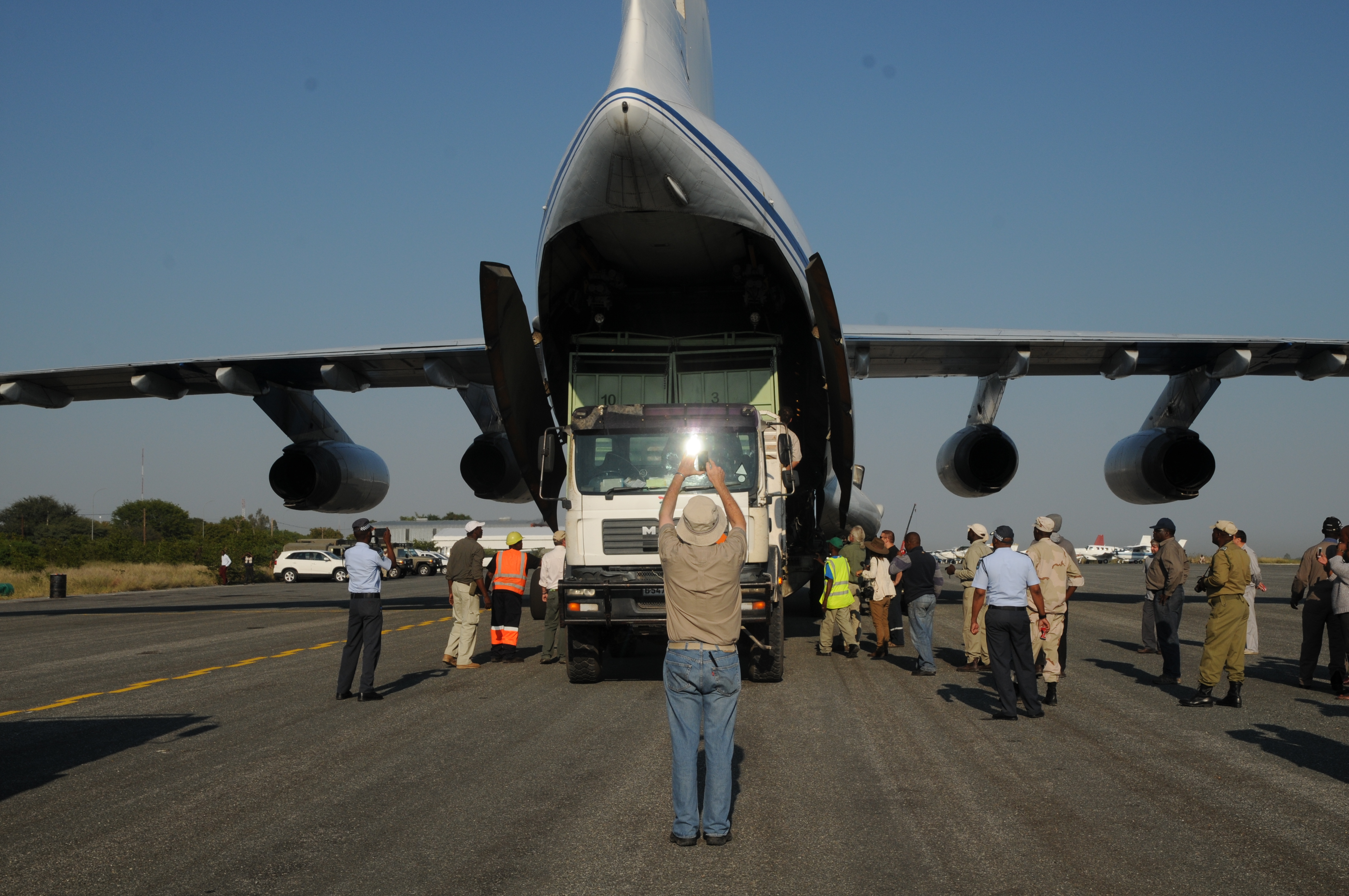 Two crates at a time were lowered onto the waiting truck, which then drove up to a crane truck and the crates were transferred to the waiting convoy. Botswana Defense Force, Department of Wildlife anti-poaching officers an Police cordoned off the area. Trucks moved up to receive their precious cargo then retreated to line up at the edge of the apron. My crate had No 9 printed on it, and my second serious buzz kicked in when the crate touched the load bed and I could see into the crate for the first time. 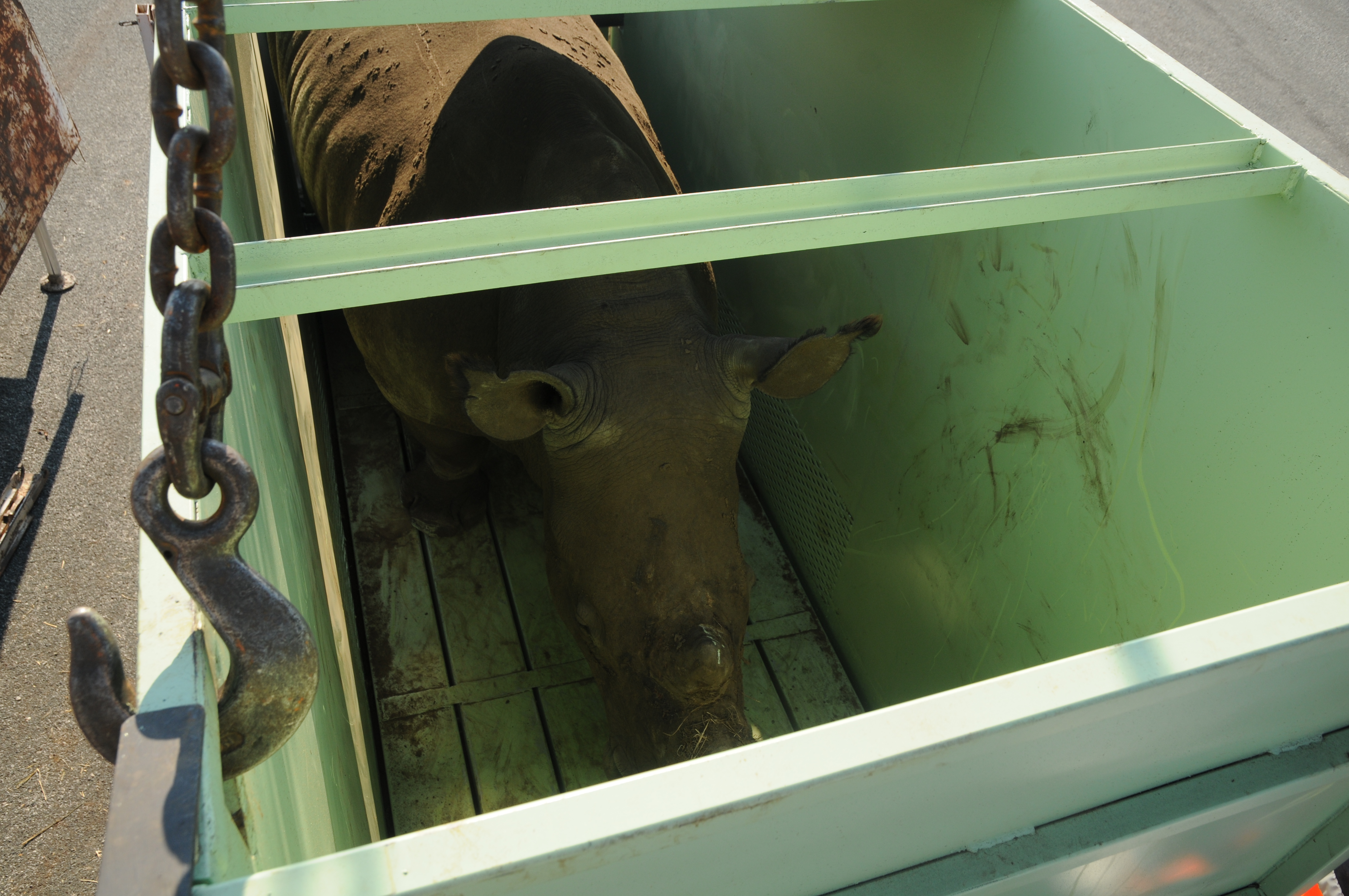 I can still remember sitting in the back of my father’s dusty safari truck back in 1960’s Kenya, driving to Mombasa when I was about 5 years old, and watching spellbound as a rhino charged up behind us and almost put his horn through the tailgate. I remember thinking how full of obstinate determination he was.  Here was that same kind of creature. Only this one had been tranquilized and airlifted over 1,300 km and I was about to drive him into the Okavango Delta, where hopefully, he could live out his days free from poachers. What a privilege. What a concept.

After two hours of frantic activity, stage two began. We filed out of the airport with police lights flashing, BDF and APU vehicles interspersed between the nine trucks. In short order, we left the bustle and traffic of Maun behind us. Not that even the most brazen taxi driver was any match for the BDF and APU Land cruisers that took their protection role seriously enough to keep both sides of the road clear… 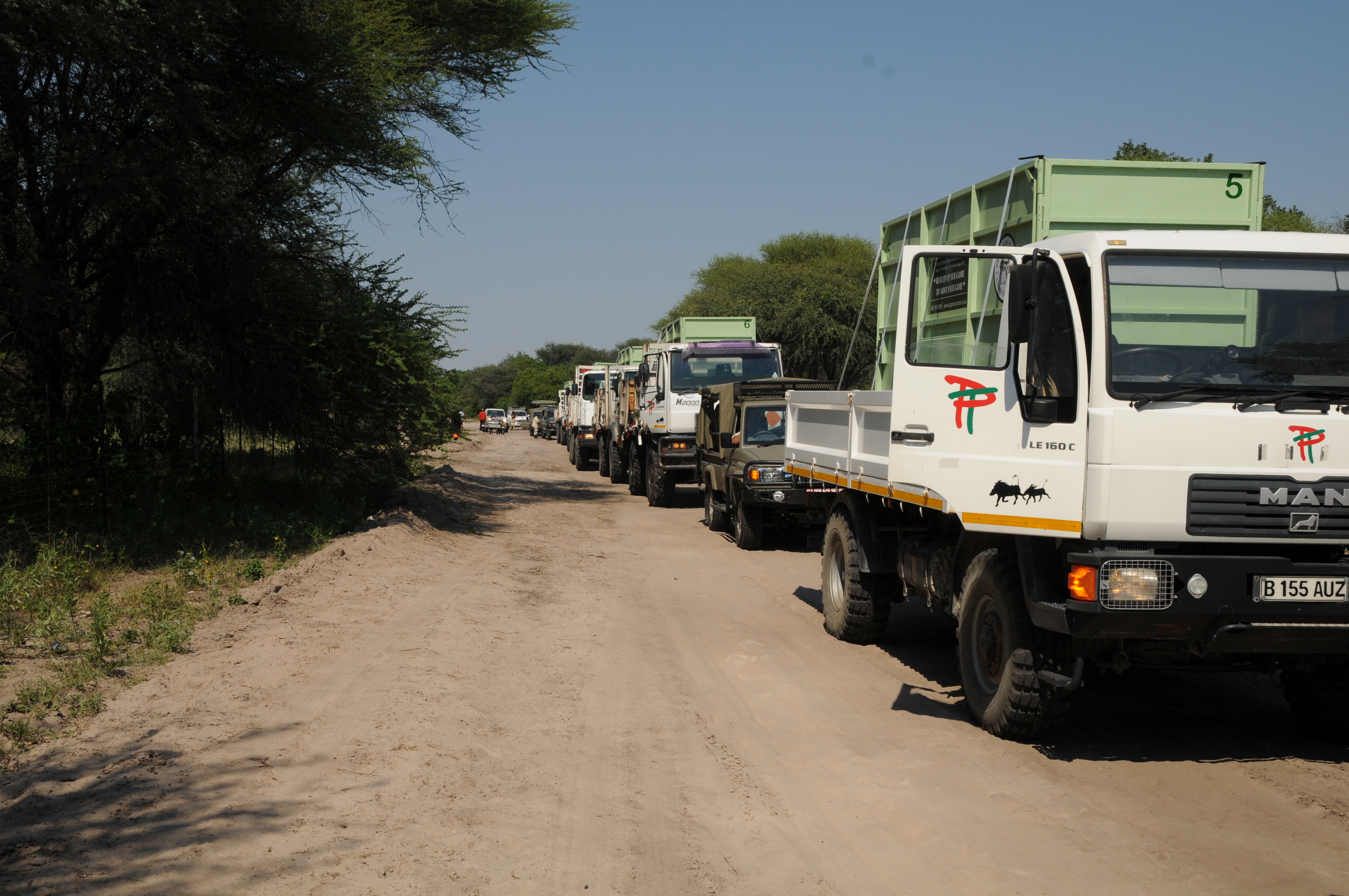 Now I had to justify myself. Driving a four-wheel drive truck through the Okavango is somewhat different to driving down a paved road. Mopane stumps that can burst very expensive tires have to be avoided. Trees close over the track requiring careful judgment, and of course, I had to be mindful of my valuable cargo. He was chilled when we were driving but some of those rhinos got very grumpy when we stopped. Trucks would move vigorously from side to side on their springs as the occupant of the crate crashed about, presumably in displeasure at being cooped up since late the day before.

At the “Buffalo fence” & Beyond had set up a tea station with Rhino teddy bears for decoration. The crew was enthusiastic and there was an atmosphere of a party in the air. Andrew’s R44 helicopter buzzed overhead with Dereck getting aerial footage of the convoy as it crawled like a great a mechanized chongololo deeper into the delta.

About an hour through the fence one of the trucks ahead of me developed a problem. It was a fuel issue that Tony had worked on very recently. The computerized common rail injectors were not delivering enough fuel and the truck was struggling badly in the thick sand. It was 2:30, the hottest time of the day, and the sand was very soft. The rhino had been in the crates for nearly 24 hours and a sense of urgency set in. Within minutes, a plan “B” had been formulated. The two smaller crates carrying the 2 rhino calves would be transferred onto two other trucks. Fortunately, these smaller crates were shorter than the adult crates and could be fitted sideways onto the load bed. The crane truck moved into position and made short work of the transfer. 45 minutes later we were on our way. 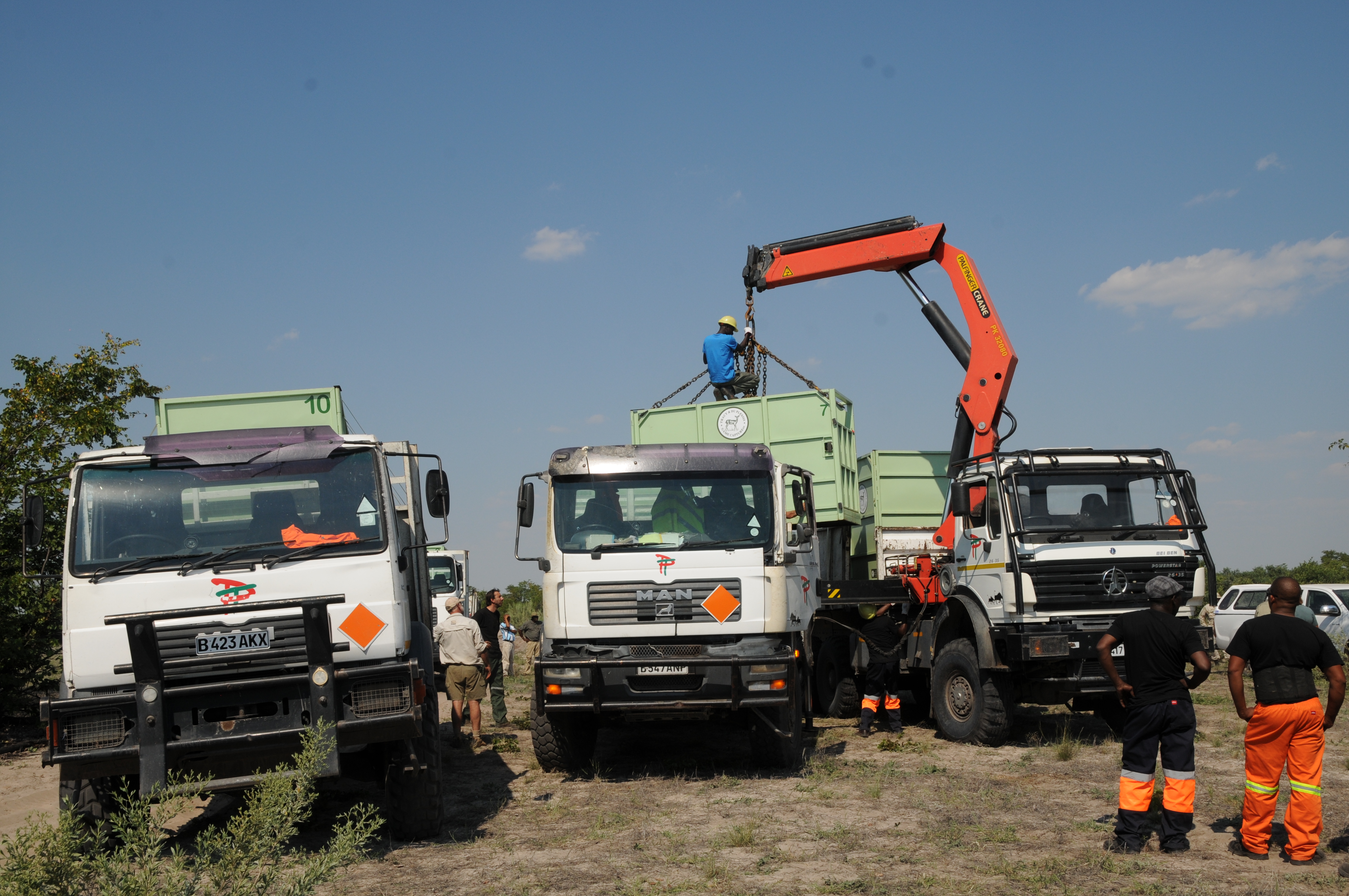 With more than 40 great truck tires grinding over the tracks it was only a matter of time before one of them was punctured, but again the professionalism borne of decades of experience was efficiently displayed. With formula racing choreography, if not quite the split-second speed, the 1400 tire was changed, and we were on our way before the front of the convoy even knew there was a problem. There was still one more obstacle to confront before we could offload the rhino. A river crossing. The challenge is not so much getting stuck because the bottom is hard sand. The trick is to keep your vehicle running through 5 feet of water. And then to keep it running once you get through. Water creates havoc with modern computer operated vehicles, ask any of the bedraggled South African 4X 4 fraternity that has had their shiny new pride and joy ignominiously towed into town. 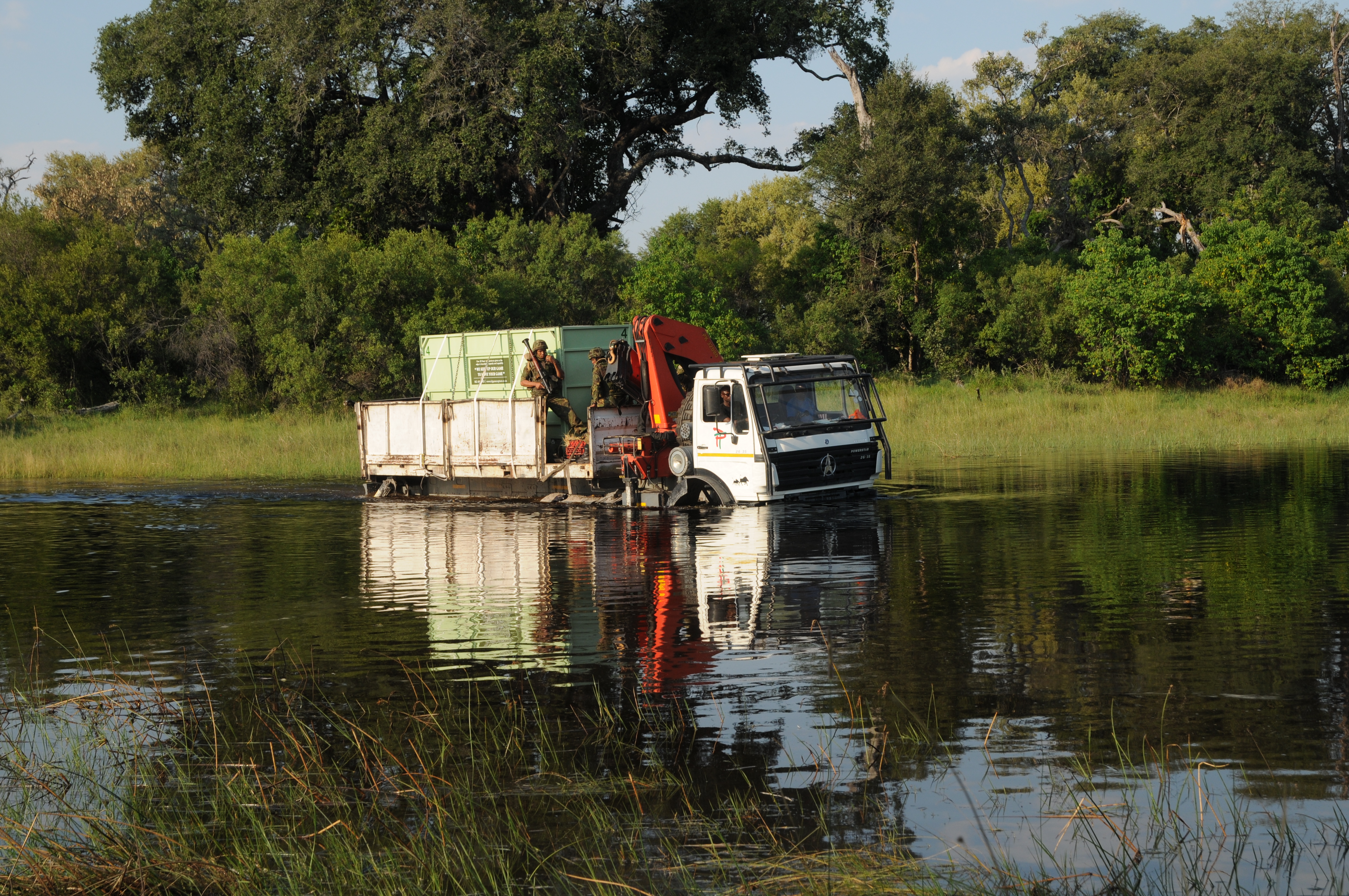 Some duck tape around the fuel filler cap, a twig into the breather and off I set. No worries. All 8 trucks came through without a hitch. But the fighter escort of Landcruisers had to be abandoned. They were the new government issue and did not have the modified air intake or “snorkel” to tackle such a crossing, so now we had a complement of armed and camouflaged on board besides the rhinos. It was getting late. The sun was in our eyes now and dropping fast to the horizon. We pushed along as best we could, and with barely an hour of daylight left, reached the release point.

Mardi Ruben was the vet in charge and he instructed us where he wanted the crates. The crane went into action and within 30 minutes 6 crates were lined up on the ground. This was to be a hot release. A straight shot into the freedom of the entire Okavango ecosystem. The 2 females with 2 calves were to be released into a specially constructed “boma” for observation before release the next day. The moment of release, the culmination of thousands of hours of work and hundreds of thousands of dollars was here. Now. It went very quiet. 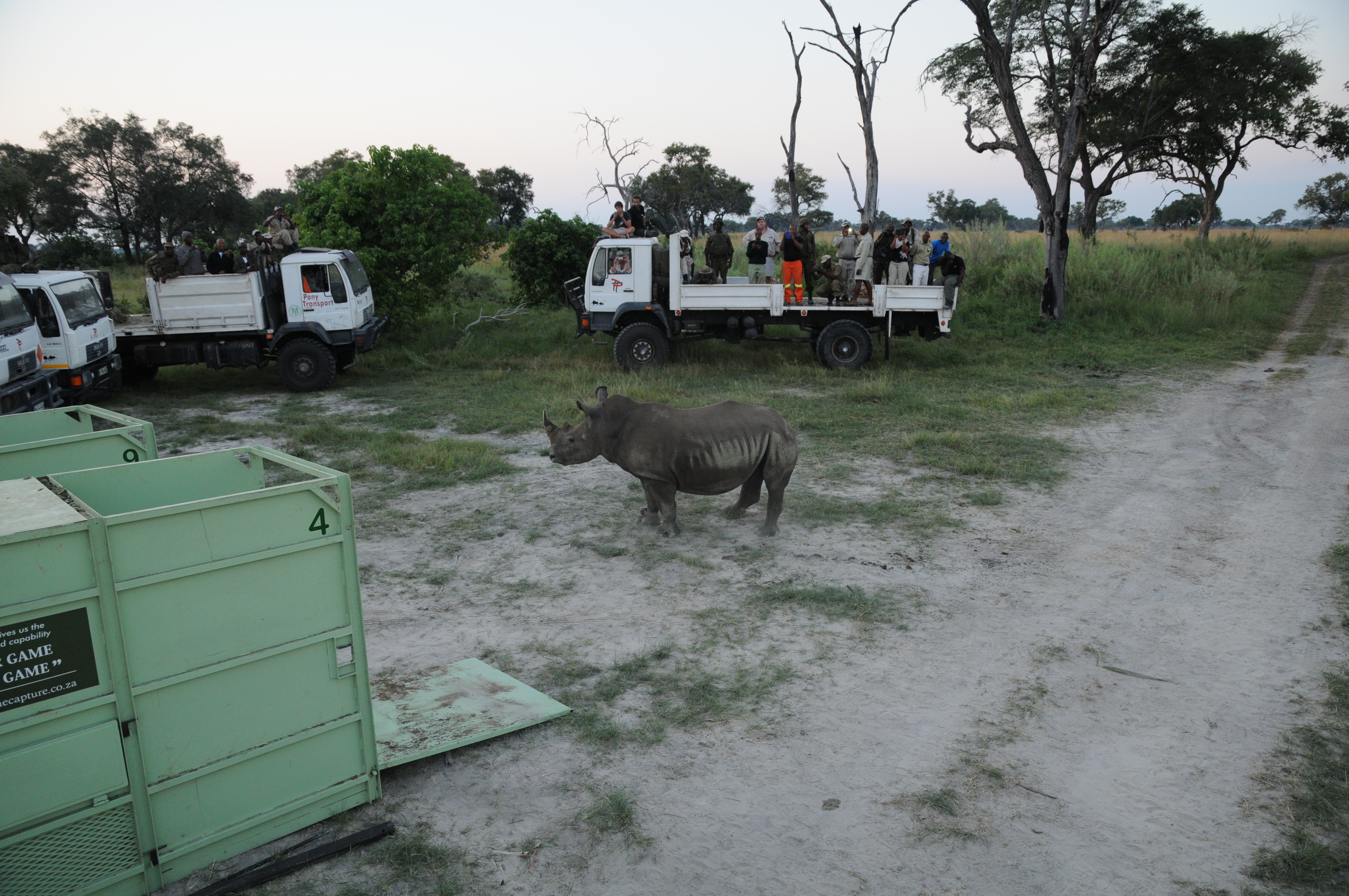 Tentatively the gates were dropped and everyone waited. Most of the trucking crew, the BDF and APU were standing on trucks parked in a semi-circle. Some people were seated in a Landcruiser parked next to the crates. A few of us including myself were standing on top of the crates.
The first male emerged backward when he realized the restraining bar was no longer there. He looked bewildered. Hardly surprising, but then with huge puff he mock-charged the crate, turned around a strutted off, apparently none the worse for his ordeal, into the fast approaching dusk.
I thought I saw a word bubble above his head that read, “I am so getting outta here. Wait where am I?” 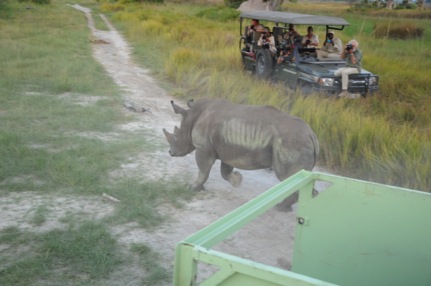 Like third contact at a solar eclipse, the magic moment passed, but what a moment. This is the first time so many rhino have been moved so far at once.

By 7 pm all 8 trucks had been reloaded with the empty crates. I was tired and dirty with the prospect of a 5-hour drive through the night still ahead, but the crates had to be back in Maun to be reloaded on the Illushin the next morning.

Dust, tail lights, BDF and APU land cruisers overtaking on soft sandy tracks. Changing gears. Listening to the note of the engine to judge when best to downshift. Then the welcoming twinkle of hurricane lanterns through the trees. What a pleasant surprise. The & Beyond team from this morning had outdone themselves. Here were a roaring bonfire and a surprise curry dinner waiting for the returning crew in the middle of nowhere. Awesome.

Check out 'Rhinos without Borders'